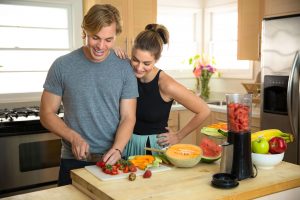 ARAME – One of several sea vegetables, or seaweeds; it is very high in minerals and trace elements, and is extremely nutritious.

EGG REPLACER- Available in most health food stores and some supermarkets, Ener-G brand “egg replacer” is a dry mix which can substitute for eggs in baked goods such as cakes, muffins, or cookies. Bananas or peanut butter will work well as a binding agent, but will also add flavor. Ground flax seeds work well too.

MILLET – A type of grain used in many North African dishes. These little yellow grains can be toasted before cooking to produce a somewhat dry, fluffy, dish. If not, they tend to be more mushy. The flavor is very light and subtle.

MISO – This traditional Japanese ingredient is made from soybeans, and has wonderful health benefits. It is a fermented soybean paste and can be used in a similar manner to bullion – in soups or sauces. Cooking miso kills many beneficial nutrients. So take care to add after cooking.

NUTRITIONAL YEAST – This can come in flakes or powder. It is most commonly bright yellow, but sometimes it is a dull yellow-brown in color. It is used as a flavoring agent in many vegan dishes to simulate a cheesy flavor. It is grown from molasses and is high in many nutrients, include many B vitamins. It can be used in gravies, casseroles, and tastes great in popcorn.

QUINOA- Pronounced “keen-wa”, this is an ancient grain used thousands of years ago by the Aztecs. It needs to be washed before it is cooked, by rinsing it in water several times, until the water remains clear water. It is very high in protein and iron and can be used as a base of many dishes that would normally use rice.

SEITAN- Seitan is made from wheat gluten which is made into a dough, then simmered in pieces in a broth of soy sauce, kombu (a sea vegetable), and ginger for several hours until tender.

SUCANAT- Sugar cane naturally. This is a unrefined natural sugar made from evaporated sugar cane juice. It looks similar to brown sugar; with slightly larger granules. Many vegetarians avoid white sugar which is refined using charred animal bones as a filter and beach it is missing any nutritional value.

TEMPEH- A fermented soybean cake. Season and use in stir-fries, sandwiches, or as a tofu alternative.

VOGUE VEGGIE BASE- A powdered vegetable broth seasoning. Most health food stores will have it.